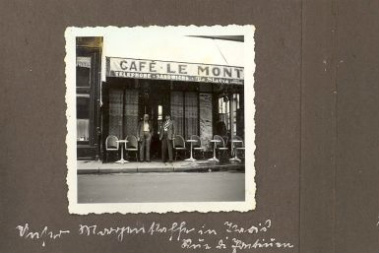 In 2005, a close friend and Blanz genealogist from the Odenwald in Germany commissioned a study by the Association of German Language of the origin of the surname Blanz. Now I would like to present, in short form, the results of this investigation.

Many bearers of the surname Blanz surely had the same experience as my ancestors. They emigrated from the Allgaeu region of Bavaria(Vorderhindelang)in 1711 to Kerzenheim, Pfalz and Hadamar, Hessen where marriage records indicate a switch from Blanz to Plantz as a result of the writing style of the Kerzenheim priests.

According to a telephone book survey, the surname Blanz is prominent in three centers in southwestern Germany:
1. Allgaeu/Swabia, with Hindelang as a focal point
2. Greater Stuttgart
3. Palatinate, Saarland, Rhine-Hessen
In all, 1050 persons are found in the entries.

The surname Plantz is limited almost exclusively to the Pfalz. According to research results, which I can confirm, the Dirmstein, Moersch, Freinsheim, Dackenheim, Battenberg, Goellheim, Winnweiler, and the large Potzbach line Plantz families all have their origin in Kerzenheim Plantz. During the early years of these families, spellings changed back and forth, even coming back to Blanz or Blantz. Today there are about 140 Plantz families in Germany.

The surname Pflanz is the most popular variation. However, according the German Language Association, Pflanz is not positively a variation; it could be an entirely independent surname. Nevertheless, research of Pflanz in Oggersheim, Pfalz connects the family to Blanz in Sulzberg. Today, the focal points of about 1500 Pflanz families are:
1. Stuttgart/Swabia
2. Ruhr/Rhineland/Bergish Country
3.Greater Berlin

The variation Pflantz is limited to Stuttgart and Berlin and Blantz only to greater Stuttgart.
Regarding the six family-name variations mentioned here, the Association of German Language says the spelling variation of –z to –tz can be ignored. I’m also passing on trying to explain items linguistically:
1. Blanz (-tz) can be seen as a variation of Planz in the Middle High German language. This theory is not plausible in the Southern German language, including Allgaeu and Swabia, because Blanz is the much older form.
2. Planz (-tz) is likely a variation of Blanz in the Southern language (cf. Kerzenheim above). North of the pf-pronunciation limit, Planz could be common in the Middle German language, possibly being evolved from Pflanz.
3. Pflanz (-tz) is located only south of the pf-limit. North of this limit Pflanz could be an adaptation of the standard pronunciation of a form of Planz in Middle German.

Note: Around 1700, a family Pflantz is found just to the west of the Pfalz in a group of small villages around Becherbach near Kirn. In 1750, Johannes Pflantz of this family took the surname to America to the Mohawk Valley of New York. Records show a gradual change in spelling to Plantz. Today this is the basis of a very large Plantz family in the United States.

1.
Blank, meaning white or bright, belongs to first-name elements inherited from Germanic times. The short form Blanko and its deflections are found in the south of the German speech area in contrast to the full form Blankhart. The –z and –tz represent a diffused suffix composed of affectionate or “pet” forms of first names—for example Fritz from Frido or Friederich; Heinz from Heino or Heinrich; and Betz from Bernhard. So Blanz belongs to a Blank form as a pet name. Thus, the name Blanz can be attributed to the class of surnames that come from first names.
2.
If the name Blanz stems from the Alps area, the so-called German-Romantic speech area, an alternate explanation is possible. The name can be interpreted as a variant of the French blanche, also meaning white or bright. The name could be developed out of the first name Blanche or a nickname for a person with blond hair and white skin.

1.
It is highly possible this name developed out of der Pflanz (in Middle German, Planz). During the time of Early-new High German, “der Pflanz” had the following connotations: plantation, growing, prosperity, adornment, and decoration. A rascal or spoiled young offspring might be called Pflanz in an ironic or insulting way.
2.
Pflanz could also be simply a name marking a dwelling or referring to a farmland identification.


Essential in the interpretation of the surname is the question, what form of writing was the first and in which speech area did the original form appear?

The fact of my ancestors writing BLANZ up to the 16th century in Vorderhindelang/Allgaeu leads me to believe that my surname PLANTZ is likely an affectionate form of the first name Blanko.